The fastest in the industry for a notarized, PhD signed paternity test!

DNA Paternity tests are used when questions need to be answered

Every child has just one biological father. But in some cases, there might be a question as to who that father might be. Many times a mother wants to know who the father of her child is to insure that she gets the support she needs. Other times the father has doubts or concerns and just wants to be sure.

Sometimes, paternity doesn’t become a question until later in life. An adult may become curious about their own heritage. Maybe there are some unanswered questions or family secrets that need to be disproved or validated.  This is where DNA testing can be a great resource.

In all these cases a DNA test can uncover the truth. But there are many types of DNA testing and more than one way to get tested.

Making the right choice is critical, especially when the results need to hold up in court.

If you were adopted you may decide to search for your biological mother or father. Ironically, in cases of adoption the father on the birth certificate may not be your real father. DNA testing can help solve the mystery.

Male adoptees, have used the Y-DNA test to determine the surnames of biological fathers. Certain genetic markers on a man’s Y chromosome get handed down from father to son, in the same way a last name might.

Each one of us inherits (randomly) 23 chromosomes from our father and another 23 from our mother. Chromosomes are found in certain areas of the body, including white blood cells, cells inside our cheeks, and in hair roots. DNA collected from any of these sites can be used to identify people and determine relationships.

Paternity test DNA examines certain loci (regions) on the chromosome. Comparing the DNA sequence of a child to that of an alleged father can show if the child’s DNA was derived from that man or not. When possible, the mother should also be included in the testing, since she can provide additional genetic information and simplify the testing process. But paternity can still be checked without the mother’s DNA.

You can confirm the father’s identity before the baby is born with prenatal testing.

If the child’s father is deceased–or just unwilling to be tested–you can sometimes acquire his DNA through forensic DNA testing. DNA and The Law

DNA testing has had a huge impact on child custody laws. In addition, women can use DNA testing to gain child support from deadbeat dads. And men can use it to protect themselves against paternity fraud.

For your convenience we accept Visa, MasterCard and American Express 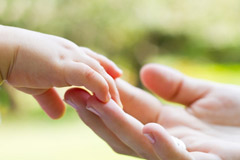